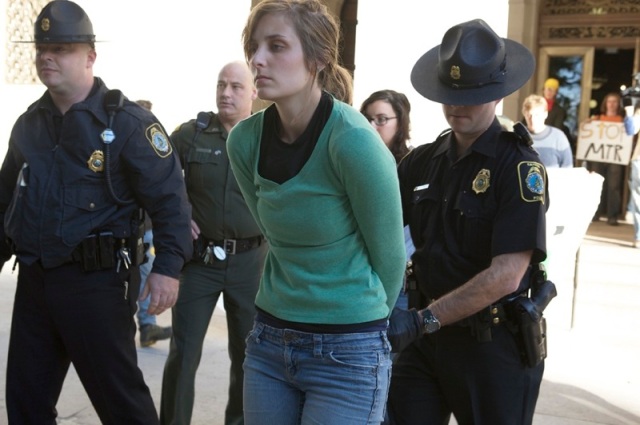 As a supportive crowd sang, “This land is your land, this land is my land,” seven peaceful sit-in activists were arrested in Governor Joe Manchin’s office at the West Virginia state capitol at 5pm this afternoon, as part of the growing national coalfield uprising to stop mountaintop removal mining. Today’s protest called on the governor to intervene in his state’s spiraling emergency over mountaintop removal mining and blasting.

The world is watching this coalfield uprising: This was the 16th action of civil disobedience by nonviolent coalfield residents and protests this year. Over 100 people have been arrested.

With clear cut forests paving the way for a mountaintop removal permit in process in the historic Coal River Mountain range, the coalfield residents and nonviolent protesters today coaxed Manchin out of his office for a short meeting. Faced with massive mountaintop removal blasts within a dangerously short range of the earthen Brushy Fork impoundment dam, which holds back billions of gallons of toxic sludge, the residents are concerned for their safety–absentee Massey Energy’s own evacuation plan noted 998 potential deaths as the minimum number in the case of a catastrophic breach of the earthen dam. Meanwhile, coalfield residents and protestors also noted the mountaintop removal mine would destroy a widely acclaimed proposal for a Coal River Mountain industrial wind farm that would bring millions of dollars in revenues and hundreds of jobs to the community.

The governor’s response? He told the coalfield residents:

“What we’re trying to do is find a balance and that’s tough to do in an extractive state.” 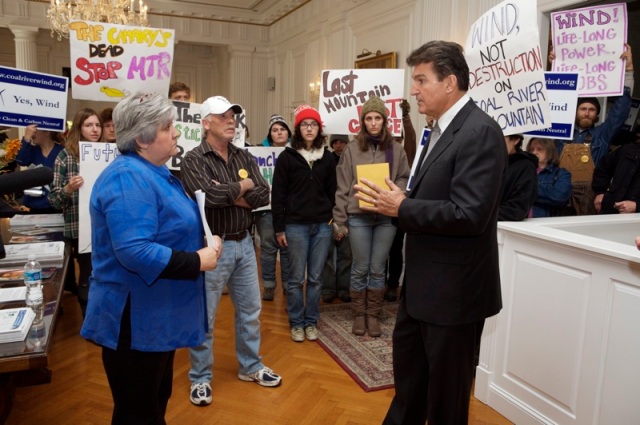 For coalfield residents and other West Virginians, West Virginia is the mountain state. In their letter presented to the governor, the residents declared:

“As residents of West Virginia’s Coal River Valley we write you to declare a state of emergency. Coal River Mountain is our last mountain untouched by mountaintop removal and it is in imminent danger of blasting. This would not only threaten our communities, it would also destroy our chance to have permanent jobs and renewable energy through ridge-top wind power. You have the power to rescind these permits.

At any moment, Massey Energy could blast part of the Bee Tree site, on the containing ridge of the Brushy Fork sludge impoundment. Brushy Fork impoundment, permitted to hold 9.8 billion gallons of toxic sludge, is the tallest dam in the hemisphere, and it sits on top of a network of abandoned underground mines.

We live in fear that the blasting could cause the dam to fail and create one of the greatest industrial disasters in our nation’s history. The emergency evacuation plan for the Brushy Fork sludge dam states that should it fail, a wall of water 50 feet high would hit Whitesville and result in the deaths of at least 998 people. Given this risk, blasting should not be allowed until your Department of Environmental Protection has conducted a thorough geo-technical examination of the impoundment’s stability in regards to the underground mines.”

For more information on the Brushy Fork coal slurry impoundment, see the great background story and maps at the Journey Up Coal River website.

Coal River Valley residents have called on the governor to stop mountaintop removal and find renewable energy and clean jobs alternatives, with a particular urgency on the Bee Tree Branch mountaintop removal permit that would destroy the area for the widely acclaimed Coal River Wind Project. The Brushy Fork impoundment has also been a focus of several recent protests.

This entry was posted in Coal Country Movie News, People in the movie, Public Posts. Bookmark the permalink.